Methodologies
Agile
Agile software development has quickly proven its value in delivering high-quality applications that meet customer needs. Datamatics Group’s agile developers produce superior code that is easier to maintain, adapt and extend. Our agile development practices, such as frequent deliveries, continuous integration, and build, deployment, and test automation, reduce risk and rework.
While adopting agile design principles is essential, the transition is not always easy. Successful agile adoption means changing entrenched cultural patterns and processes—there is no “one size fits all” approach. We can guide you through the transformation. 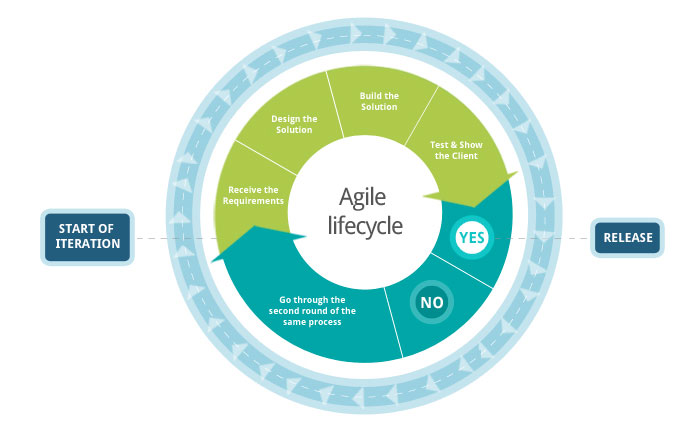 Most software product development uses either the Waterfall methodology. A development methodology is the process by which an engineering team will build a given product.

“Rapid-development language” is a general term that refers to any programming language that offers speedier implementation than do traditional third-generation languages such as C/C++, Pascal, or Fortran. Rapid-Development Languages (RDLs) produce their savings by reducing the amount of construction needed to build a product. Although the savings are realized during construction, the ability to shorten the construction cycle has projectwide implications: shorter construction cycles make incremental lifecycles such as Evolutionary Prototyping practical. Because RDLs often lack first-rate performance, constrain flexibility, and are limited to specific kinds of problems, they are usually better suited to the development of in-house business software and limited-distribution custom software than systems software.

Spiral Model is very widely used in the software industry as it is in synch with the natural development process of any product i.e. learning with maturity and also involves minimum risk for the customer as well as the development firms. Following are the typical uses of Spiral model:

The advantage of spiral lifecycle model is that it allows for elements of the product to be added in when they become available or known. This assures that there is no conflict with previous requirements and design.

This method is consistent with approaches that have multiple software builds and releases and allows for making an orderly transition to a maintenance activity. Another positive aspect is that the spiral model forces early user involvement in the system development effort.

On the other side, it takes very strict management to complete such products and there is a risk of running the spiral in indefinite loop. So the discipline of change and the extent of taking change requests is very important to develop and deploy the product successfully.

The Software Prototyping refers to building software application prototypes which display the functionality of the product under development but may not actually hold the exact logic of the original software.

Software prototyping is becoming very popular as a software development model, as it enables to understand customer requirements at an early stage of development. It helps get valuable feedback from the customer and helps software designers and developers understand about what exactly is expected from the product under development.

Prototypes can have horizontal or vertical dimensions. Horizontal prototype displays the user interface for the product and gives a broader view of the entire system, without concentrating on internal functions. A vertical prototype on the other side is a detailed elaboration of a specific function or a sub system in the product.

The purpose of both horizontal and vertical prototype is different. Horizontal prototypes are used to get more information on the user interface level and the business requirements. It can even be presented in the sales demos to get business in the market. Vertical prototypes are technical in nature and are used to get details of the exact functioning of the sub systems. For example, database requirements, interaction and data processing loads in a given sub system.

Under sdlc Incremental Model, software requirements are initially broken down into multiple standalone modules. These modules are drafted according to the level of priority they have under the software project. Here every module is a standalone function and has to be developed according to the implementation and progression of the project. Although they can be inter related but they sure are able to exists without having the need of other modules and functionality. Incremental Model is mostly followed by large projects which requires implementing individual functions and adding standalone models in the long run.

Click on the social media icons below and stay connected with us across the web and throughout your day.